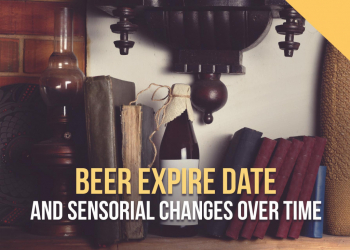 A beer brewed following the correct process, under good quality control and stored in the right conditions does not expire. This means the beer does not become unsafe to drink. But, even if the beer remains safe to drink, it is important to remember that beer is composed of yeast and other living organisms, making it a “living” drink which needs very good storage care. Moreover, beer is a product rich in flavour and aroma compounds which will go through changes during its storage. Let’s see what these changes are, how to control them to perform the best storage possible, and learn more about beer expire date.

Flavour stability of beer is one of the greatest challenges in the brewing industry and has been since very long ago. Even if certain types of beer can be conserved in their packaging for months without noticeable flavour impact, a beer of highest quality brewed with the current techniques is estimated to be stable for 3 to 4 months.

Staling of beer corresponds to transformation in beer’s chemical organic compounds during its storage. These changes can occur right after the beer is packaged and will affect sensory properties of the beer such as its flavour, aromas, colour and texture. Three main factors are responsible of beer staling: oxygen, warm temperature and sunlight exposure.

Beer oxidation, meaning oxygen pick-up in beer, is the most important factors inducing beer staling. Because oxygen is naturally present is the air, it is difficult to limit its introduction in beer. As oxygen dissolves in the beer it interacts with its flavour compounds, most importantly those brought by the hops, it induces a deterioration of its flavours and aromas as well as its colour and carbonation.

Temperature is also a very important parameter to control during beer storage. We know the importance of storing food and drink in correct conditions, and it is just as important for beer. Just as oxidation, exposing beer to warm temperatures will negatively impact its sensory properties. This is why it is always recommended to store beer and dry and cool conditions, most preferably in a fridge. Moreover, warm temperatures accelerate staling of beer induced by oxidation, which justifies how important it is to control temperature thoroughly.

Sunlight exposure is also responsible for negative sensory changes in beer. It will mostly affect its colour but it will also have an impact on beer flavour. This is why beer is always packaged in brown or green coloured glass bottles, those colours protect the beer from the sunlight and allow the bottles to be exposed to the sun harmlessly.

The sensorial impacts of beer staling

The impact of beer staling will differ from a beer style to another. A very hoppy beer will not react the same way as a strong dark one for example. This is due to the ingredients of each style, their importance in the final product’s sensory properties and how they change during staling.

During beer staling, a sweet tastes will start to increase, leading to flavours described as “toffee-like” by or “honey-like”. These flavour changes can have a more positive impact in beers with an important malty character.

Another more detrimental taste developing over time is a papery/cardboard type of flavour. Brewers and scientists have linked this flavour to the result of beer oxidation. Other changes in sensorial properties are also very characteristic of oxidation: changes in a darker colour or loses of carbonation for example.

As opposed to craft beer, industrially brewed beer is pasteurized before packaging which makes it free of any microorganisms and limits the presence of any pathogens. However, both craft and industrially brewed beers go through a boiling of the wort, which induces a sterilisation of the unfermented liquid and limits any risk of contamination brought by its raw ingredients.

This boiling makes craft beer safe to drink and can justify why it doesn’t expire. However, it is important to remember that the brewing process has to follow good quality control, and also bear in mind that any operation conducted on the beer after the boiling can bring risks of contamination.

Once the wort has been fermented into beer, it creates an environment of high alcohol content and low pH which limits the risk of contaminations by external pathogens. Beer is still at risk of exposure to microorganisms, but they are not harmful for human consumption.

Hops also play a role in microbial control. This is one of the reasons why hops were chosen as an ingredient to bring flavour to the beer. And this is also why very hoppy beers started being brewed and how IPAs emerged: their high hop content allowed the beer to be safe against microbial pathogens, even during long storage or transport, and allowed the British to send them to their Empire in India!

Every brewery gives different expire dates to their beers, depending on the beer style, package or simply their own standards. Usually, beer normally has a best before date between 3 and 12 months. Light beers and hoppy beers are best drank 3 months after being packaged, malty beers such as ambers, stouts or porters are best drank up to 6 months after packaging, and stronger beers, beers fermented wildly or barrel aged beers can be up to 12 months after packaging or even stored for years to let their flavours and aromas develop.