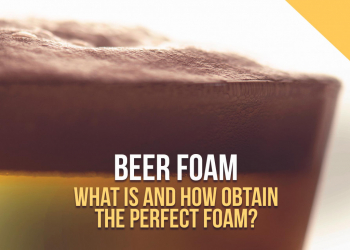 What is more tempting than a beautiful foam on top of your beer? Foam is simply one of the most appreciated characteristics of a well brewed beer. It makes the beer look appealing, delectable and guarantees a good brewing and packaging process of the beer while preserving all its flavours and aromas once in your glass.

Let’s see what beer foam really is and how to obtain the perfect foam during your very own brews.

What is beer foam?

Chemically speaking, a foam is a colloidal mixture of gas bubbles dispersed in a liquid. Beer foam is mainly constituted of CO2 bubbles dissolved in the packaged beer, but also many other chemical compounds. Its creation happens when a bottle or can is opened. The internal beer pressure in the container drops quickly and induces the escape of the dissolved CO2 of the liquid to its surface.

In beer, most of these surface active agents are proteins and polypeptides (shorter particles than proteins constituted by a sequence of amino-acids). One of the main surface active agents responsible of beer foam is a protein called Lipid Transfer Protein 1, which is naturally available in barley. Another important group of agents in the formation of beer foam are proteins called albumins. These proteins bound with the bitter hop compounds produced during the boil of hops, the iso-alpha acids, and they induce a stronger head and lacing in hoppy beers.

But Lipid Transfer Protein 1 or albumins aren’t the only foam promoting substances which are contained in beer. Dextrin for example, a polysaccharide naturally produced during the malting and brewing, is well known for its positive impact on beer foam.

Beer is a very complex liquid, rich in organic compounds which are obtained from the ingredients used for your recipe but also the process followed during your brew. Let’s look into the different ingredients and operations which play a role on beer foam.

Malt and other cereals

First of all, certain cereals are richer than others in foam enhancing compounds. Wheat is richer in proteins than barley and is therefore widely used to promote foam in beer. It can be used both is flaked form or malted form. And just like wheat, flaked barley is also a strong enhancer of beer foam.

It should be beard in mind that a high amount of proteins leads to a hazier beer. Proteins often induce cloudiness and chill haze so a good balance should be found between clarity and foam. However, an advantage of a high protein content is that your beer will present a smoother mouthfeel and a deeper body.

However, as we know, these cereals are natural ingredients. Meaning they are exposed to changing climatic and growth conditions over the years and their protein contents can be affected by that.

Apart from the importance of proteins, the degree of malting also plays a key role on foam as certain malts are richer than others in dextrin according to this process. For example, a very good foam enhancer is the lightly roasted GoldSwaen@Light malt from The Swaen (whose malts we use in our products) which presents a slightly darker colour than certain base malts but promotes beer foam thanks to its higher Dextrin content obtained during its roasting.

Roasted malts from the Gold Swaen category are good foam enhancer, as well as toasted malts from the Black Swaen range, but the darker they are and the more impact they will have on the colour and flavour of your beer. This is why the GoldSwaen@Light variety is well appreciated for lightly coloured beers, as it as a very little impact on the wort colour.

As a conclusion, using speciality malts in your recipe is a good way to brew a more complex beer and increase its concentration in foam positive agents.

Hops and their bittering compounds

Hops also interact with the hydrophobic compounds brought by the cereals. The iso-alpha acids produced during isomerization of the hops when exposed to the boil have a positive impact on foam. This means that the more bitter the beer is, the higher concentration of iso-alpha acids it has and the better its foam will be.

As mentioned before, the albumin proteins are highly responsible for this as they are the molecules that bind with the iso-alpha acids. Once the hydrophobic albumins linked with iso-alpha acids are bound to the CO2 bubbles and brought to the surface, they establish a stronger matrix and are good promoters of foam stability.

Conclusion of this part? Brew IPAs!

The importance of the brewing process

A key parameter brewers can play with during the mash rest is the temperatures. This temperature promotes certain enzymatic reactions to occur and produce the desired molecules.

An important quality indicator of malt is its “modification”. Modification corresponds to the transformations the barley went through during its germination over the malting process. During this modification, soluble nitrogen is obtained and will promote head retention, provide yeast nutrition, favour body and mouthfeel of the beer.

When it comes to brewing, brewers can perform a 15min protein rest of the malt at 55ºC to break up the longer proteins and obtain a higher content of foam promoting proteins.

Also, brewers can perform a warmer mash rest, around 70ºC for example, to produce a slightly less fermentable wort which will favour the body, mouthfeel and foam of their beer.

And as well as for the process, the brewing liquor is of importance to the brewer. Just like other parameters, beer foam can be promoted with a good mineral profile of the beer. Two very important minerals in this case are Calcium and Magnesium. These minerals will reinforce the matrix formed by the proteins around the CO2 bubbles as they will form a strong ionic link with the proteins and encourage their cross-linkage with iso-alpha acids.

When it comes to the packaging and conditioning of the beer, a key parameter to control is the carbonation. Indeed, it will greatly affect your perception of the beer s you drink, and it will importantly affect its head. We think the link between CO2 and foam is quite clear now, so you can guess a good carbonation leads to a good foam!

Beer foam is the sign of a healthy beer. It shows it has been well brewed, fermented and packaged, it is well enjoyed and delectable, and it contributes to good conservation of the flavours and aromas.

To promote a good foam, the ingredients are of importance. A complex grain bill will lead to a richer profile of the beer and a better foam. Using flaked cereals or wheat, rich in proteins, are a commonly applied method in the brewing industry. Malts rich in dextrin, such a GoldSwaen@Light or other roasted and toasted malts also favours beer foam.

Apart from the great importance of malt, hop also have their role to play as a more bitter beer shows a better foam.

And as for the process, the protein and mash rest are good practises when brewing with under modified malt and a good mineral profile also favours a good head on top of your glass.

It should be noted that certain parameters have a negative impact on beer foam:

We hope you now have more keys to obtain the perfect foam when brewing and pouring your beer! We hope this long list of parameters to play with has given you great ideas for your next brews, and solutions to any foam problems you might encounter with your beer.