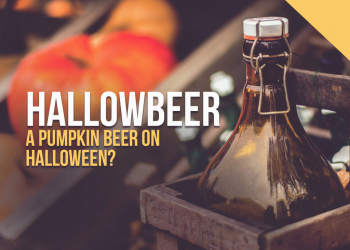 Beer is up for Halloween!

The festival of pagan origin, Halloween, which is celebrated on October 31, is around the corner and brings very special beers with it.

The celebration dates back to the Samhain festival (end of summer), which celebrated the end of the harvest season and began a new Celtic year with the autumn solstice.

Halloween is currently a mixture of the original Samhain and the religious holiday of All Saints Day. It is a tremendously popular celebration and one of the most widespread celebrations of the 21st century, which has led to the rise of a series of beers with unique characteristics that can be enjoyed by the beer enthusiasts (on this calendar day marked as our particular Hallowbeer) while the little ones enjoy in disguise with their 'Trick or Treat'.

These are pumpkin beers or Pumpkin Ales, very popular seasonal beers in the US, which with the boom of craft beers is frequently to see around the world. To these beers are added pumpkin pulp and spices such as cinnamon, clove, nutmeg, ginger or allspice in its preparation, since, on Halloween, in the American country exporting the festivity, food and drink are traditionally based in the pumpkin.

The history of these beers dates back to no less than the seventeenth century, but it is from 1980 when they stand out with a more spicy and sweet version. A version that surely appeases the fears of the Samhainophobics (people with a fear of Halloween) and delights those who adore this terrifying day of the year.

From My Brewery, we encourage you to try a different elaboration and create your own Pumpkin Ale recipe this fall. Add mash during boiling, whole pieces of pumpkin during maceration, or some spices to taste before bottling to preserve all its aroma and flavour. Take advantage of your equipment! Make use of your Brewery Equipment and enjoy your own seasonal beer!