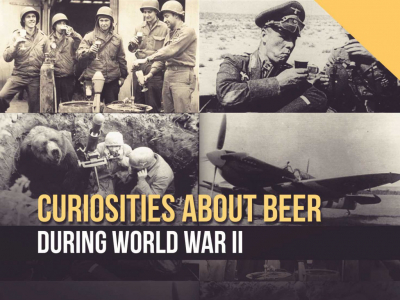 Our favourite drink, beer, has been very present at different times in history, having been a breath of fresh air for soldiers in the Second World War (1 Sept 1939 - 2 Sept 1945) in some of the most notable battles. Maintaining the morale of soldiers in the Second World War was no easy task, indeed we lost sixty million people during these dark times. Men did not live of bread alone, so here are some curious references about the role of beer in World War II.

Providing beer to the troops, a patriotic duty

According to the British government and with the aim to encourage the victory of the Allies, in 1942 the breweries of Great Britain created a committee named 'Beer for the Troops', as it was established that one of the duties of beer producers should be to provide the drink to the troops as an encouragement to endure the war situation and as a reward after the victory.

Examples of this were the breweries Whitbread and Wanted and Watkins & Smith who provided beers to the soldiers after the Siege of Tobruk or on the famous "D-Day" during Operation Overlord, the landing operation on the beaches of Normandy.

A brewery was even created on a ship so that the soldiers would never run out of precious beer. The British Navy, at the insistence of Winston Churchill, studied the fitting out of a dozen ships as leisure centres: with theatres, shops, a swimming pool, a dance hall and a variety of entertainment, including a ship for brewing beer on the high seas.

The engineers planned an entire brewery capable of producing 250 barrels a week, equipped with machinery to brew beer from desalinated seawater, a boiling pot that used the ship's own steam to heat it and six fermentation vats. Although this ship never operated during the war (the conflict ended before the ships construction), it did sail the seas and visited soldiers who had to remain at their posts after the end of the Second World War.

Another case of a country being required to provide beer to soldiers during World War II was the United States of America, where the Department of Agriculture ordered all breweries to donate 15% of their beer production to the troops overseas.

The grizzly bear that fought against the Nazis

Wojtek the bear was adopted by the soldiers of the 22nd Artillery Supply Company, 2nd Polish Corps, and like the rest he received his salary, food rations (including beer) and became no less than a sergeant for war merits. This also enabled him to ride on board the ship that took the Polish company from Egypt to Italy.

Rumour had it that the Germans were leaving poisoned water supplies behind to force their opponents to carry supplies, so Major Keith Hudson of 412 Squadron, 126th Wing of the Royal Canadian Air Force had an idea to keep his comrades from going thirsty in battle.

He instructed a couple of pilots to take the three aircraft fuel tanks, wash them out and fill them with beer, 270 pounds of beer in total to refresh the morale of their comrades.

Although the precious liquid reached the soldiers, it was reminiscent of oil as a result of the containers, and then again the Poles would surprise us. The 131st Wing squadron, composed of pilots from Poland, realised that many of the wooden barrels used by the breweries had the same diameter as the bombs and could easily be attached to the aircraft in their holders. To improve aerodynamics, metal cones were simply added as shown in the picture below; the barrels carried less beer than the fuel tanks, but tasted better and cooled with the altitude of flight.

Guinness, the weapon that saved Ireland from the Second World War

Ireland, which was highly dependent on its neighbours, was placed under a blockade that plunged the country into a deep crisis, so the Irish government used its best weapon: a ban on beer exports. At the time, the Guinness brewery was exporting one million barrels of beer a year, mainly to the UK.

As a result, British soldiers and citizens lost morale and calm without their precious brew, forcing them to enter into talks with the Irish and give in to their neutrality in the armed conflict.