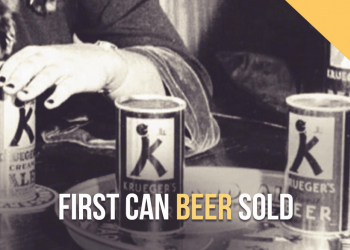 It was 1935 when the first canned beer appeared for sale. After many decades of experiments, and more than a decade of dry law in the United States, this canned beer was brought out by Gottfried Krueger Brewing Company in Richmond, Virginia.

It’s curious to note that, something as ordinary as canned beer, starts to be produced only 100 years ago. However, there are some historical and scientific causes that could explain that.

First question is, who was Gootfried Krueger? He was a German immigrant resident in Newark, New Jersey. He had come from Germany in 1853, right after that, he began working in Newark, at the Adams & Laible Brewery, located in Belmont Avenue. In this place he learned the trade of master brewer. Ale, Porter and Stout had been the classic styles, but the rising European emigration was more likely to imbibe German-style lighter beer. This give rise to born of American-style lager beer brewed, which was brought to birth by those German emigrants.

Few years later, in 1865, Krueger had become owned his own brewery. Lager beer had a great success becoming the national drink. In 1850 its production was only 750.000 barrels and by the end of the 1900 there were 39 million units. In those days, factory buildings had a Victorian style emphasising the splendour of German-American brewers.

The American Can company had been experimenting to can beers since 1909, but they were a big problem, the was not filtered at this time, reason why sometimes yeast continued carbonating in the cans until the overpressure made them explode. American Can stops testing after the United States Dry Law enters into force on 17th January 1920. The outbreak of War in Europe in 1914 had worsened the situation of German brewers, who were considered unpatriotic, and pro-German. Obviously, this period wasn’t not ripe to continue with the project. Some of these brewers were then involved in the production of soft drinks and milk products. But some of those like Krueger, launched his own beer, Krueger's Old Essex Brew, which contained less than 1% of alcohol allowed by law, and a beer-like taste.

It would be necessary to wait till the end of Dry Laws in 1933 to see the first pressurized beer cans with a special coating, thus avoiding the reaction with tin (similar to method done with the barrel). The original idea was of the brewer Krueger, who had been doing tests during the Dry Laws even at the risk of conviction. Unfortunately, Krueger couldn’t see its product in the market because he had died in 1926, before the end of those Laws.

A new project had started on January 24th 1935: The Canned Beer which help to improve the storage and eliminate the empty bottles return. The new cans cooled faster, and the brewery avoided undue taxation on barrels after the end of the Dry Law.

The canned beer success was assured. Finest Beer was brewed by Krueger was sold for miles. The first cans were not today. They were flat on the top; an opener was needed to open it. The steel which it was made will not be replaced by aluminium until 1958. What about the pull-tab? It did not appear until 1960!