Carbonation of your beer

History of the Mead. Some curious facts that you surely did not know

History of the Mead. Some curious facts that you surely did not know 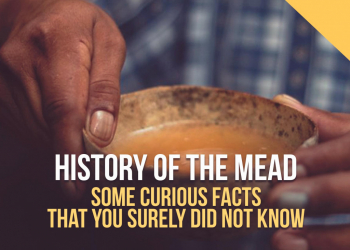 Fermentation of water and honey, we are talking about mead in this post. According to the chemist and expert in science and cuisine, Pere Castells, it is the precursor drink of beer, and the first consumed by humans.

Its discovery was probably accidental, the result of a natural fermentation of honey.

Made by Greeks, Romans, Celts, Normans, Saxons and Vikings, on many occasions as a compliment to their heroes and other times as a regular drink. Each of them called mead, or beverages fermented with honey, in a different way. Greeks called it melikraton, and Romans called it mulsum, which is known today as pyment, a mixture of honey and grape juice, which has survived to this day, and there are some well-known brands in the market that manufacture it.

And among all the historical data that we could name, we are going to highlight those that have most caught our attention.

The first writing with reference to mead can be found in the verses of the Rig Vedá, one of the sacred books of Vedism (a religion prior to Hinduism), between 1700-1100 BC.

The oldest remains of mead that have been found to date come from China around 7000 BC, found in ceramic vessels, with remains of a fermented drink based on rice, honey and fruits.

Among the most surprising remains found, we are struck by the large bronze cauldron discovered in Germany, dated around 400 BC, inside which remains of a braggot, a mixture of mead and beer, were found. At present, it is called "special beer" or "beer with honey." In the BJCP style guide it is categorized as Mead, although many consider it must fermented with honey. Braggot is traditionally made with 50% honey and 50% malt, although there are those who add spices to the mix.

The origin of the braggot, according to some historians, could go back to the year 1000 BC, consumed by the Pictos tribe, who had power in the area of Scotland until the 9th century.

We find an association to rituals in the Mayan culture with a slight modification: the balché, made with honey, water, and a few pieces of balché tree bark. Even this tree and the associated drink became a symbol of the cultural resistance of the Mayans, as it was banned by the conquering Spanish. Today it is consumed at the beginning of the harvest seasons, being an offering for the protection of livestock and fertility.

You already know the relationship of the Vikings with mead, as the only food of the god Odin, and as a drink that would accompany them after death in Valhalla. It should also be noted that the Vikings added other substances to mead, such as ergot of rye with a high content of lysergic acid, the base of the drug LSD. No wonder he was present at their rituals!

What is clear to us is that the union of water and honey, including or not other ingredients, has a very ancient origin, and has traveled a long spatial and temporal journey. The change of crops from the 10th century, cheaper and simpler, towards cereals or the vine, gave way to the increase in consumption of beer and wine, leaving the consumption of mead for the Nordic countries, where the exploitation of these crops it was complicated. The increase in sugar imports from the Caribbean from the 17th century also contributed to its displacement, which decreased honey production.

So, now that you know these curious facts about mead, do you dare to do it at home? In addition to getting your kit or refill choosing between these recipes, take a look at this article where we explain how to pair mead in the best way.