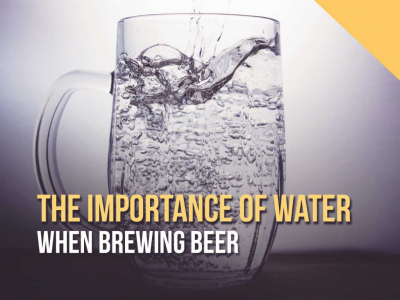 As we all know, beer is made of 4 ingredients: water, malt, hops, and yeast. Malt is important for the character, flavour and sugars it brings to the beer, hops are important for the very wide aromas and flavours and the bitterness they bring and yeast is key as it allows brewers to convert wort into beer. But what about water? Very little attention is given to brewing water, and yet it constitutes more than 90% of the beer. Today it’s time to give some importance to brewing water and show how essential it is to beer.

The importance of water in brewing

Water is the brewer’s most useful tool and also its most important ingredient. Water is the base on which beer offers its delicious flavours and bitterness, its delectable body, foam and fizz. But apart from water representing more than 90% of the beer composition, it is present from the beginning to the end of the brewing process:

It is the first ingredient brewers calibrate before starting the infusion of the grains. It rinses the grains just after the mashing to extract all their sugars. It can be added at several stages of the boiling to adjust the gravity of the beer. And it is used for the cleaning and sterilising of the machines and equipment. Water is everywhere.

- Its minerals impact the flavour, body, visual aspect and stability of the beer.

- Its pH affects the mashing and fermentation and the final flavour of the beer.

- It can create off-flavours from certain of its constituents or if it is contaminated.

All these parameters are defined by the origin of the water. But brewers can control them to obtain a desired water profile, best suited for the beer style they want to brew.

Calcium contributes to water hardness. It brings flavour, stability and clarity to the beer.

Magnesium also contributes to water hardness, has an effect on mash pH and efficiency and is a yeast nutrient.

Sodium if in excess can be poisonous for the yeast, it shouldn’t exceed 100ppm.

Bicarbonate and carbonate determine water alkalinity. They raise mash and beer pH and can bring a harsh bitter flavour.

Sulfate increases hop bitterness and dryness of the beer and brings a sharper feeling.

Chloride makes the beer seem fuller and sweeter, well appreciated with malty beers, and it improves beer stability and clarity.

Because sulfate and chloride have opposite properties, brewers relate them by the sulfate-to-chloride ratio.  A ratio of 2:1 or more induces a drier and more hoppy beer while a ratio of 1:2 or less leads to a rounder, sweeter and more malty beer.

Just like the mineral content of water, its hardness and alkalinity can be found in water city reports. But you can also test your own brewing water to know these values.

Water hardness is defined by the quantity of dissolved calcium and magnesium in the water. The higher the quantities, the harder the water and the lower, the softer the water is. Hardness decreases the pH of brewing water and beer.

Water alkalinity is defined by the quantity of dissolved carbonate and bicarbonate. The more alkaline the water, the higher the concentration of bicarbonates. Alkalinity raises the pH of brewing water and beer.

So it is clear that the mineral composition of water influences wort and beer pH. And water pH is a very important parameter to know before starting to brew as it affects the efficiency of the mashing and fermentation. The ideal mashing pH should be between 5,2 and 5,8 at 20ºC. As the pH can fluctuate with temperature, samples taken at mashing temperature of 67ºC should be between 4,9 and 5,5.

Here follows an example of the mineral content (in ppm) of typical brewing water profiles:

This table can be taken as an example to have an idea of the water profile in specific brewing regions. But please note that the values can fluctuate and are just an indication of what the concentration of minerals can be in these historical brewing regions.

From such analyses, scientists are able to provide suggested water profiles for different beer types, which can help brewers in adjusting their water to the style they want to brew:

An important thing to bear in mind when adding mineral salts to your water is that these salt are molecules which influence the concentration of several minerals, not just the one you aim to adjust. For example, Gypsum salt (CaSO4) will not only influence your water hardness with its calcium but also your sulfate profile.

To increase water hardness, a commonly used water salt is calcium sulfate (CaSO4), very appreciated when brewing IPAs as its sulfate accentuates hop bitterness. Another widely used salt is calcium chloride (CaCl) which brings a fuller and sweeter profile to your beer and accentuates its malt flavours. Magnesium can also be used to increase water hardness, a commonly used salt is magnesium sulfate (MgSO4), also known as Epson salt.

To increase your alkalinity, carbonates are usually the most used salts. Sodium bicarbonate for example, also knowns as baking soda (NaHCO3) or calcium carbonate, also known as chalk (CaCO3) are commonly used.

Commonly used chemicals to modify the pH are sulfuric and phosphoric acids or lactic acid. But malt can also be quite helpful to adjust the mash pH. Roasted malts for example can decrease the pH by 0,3 units if they constitute 10% of the grain bill, or even 0,5 units if they represent 20%. And acidified malts can also be useful to adjust the pH in water with low residual alkalinity, for every 1% of acidified malt added in the grain bill, the pH decreases by 0,1 unit.