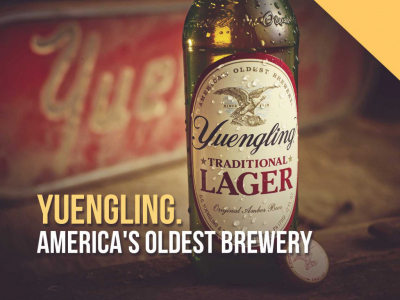 Almost two centuries of history, and one of the most consumed beers in the United States. The history of one of the oldest breweries in the world never ceases to impress us. We are talking about Yuengling, the oldest American brewery, since 1829. Will you join us through history?

Founded by David Gottlieb Jüngling, a German emigrant to the United States in 1828 in search of opportunity, from Aldingen, a town near Stuttgart. At first it took the name Eagle Brewery, and was located on Center Street in the city of Pottsville. But after a fire in 1831, it moved to its present location on W. Mahantongo Street at 5th Street.

It was in 1873 that the name was changed to Yuengling, an adapted version of the founder's surname, but without losing its quintessential symbol, the eagle.

Adaptation to the Eighteenth Amendment

On January 16, 1919, the 18th Amendment was ratified, prohibiting the manufacture, sale and transportation of alcohol in the United States, and was not repealed until December 5, 1933. What did Yuengling do during these years? They adapted to the circumstances and used their ingenuity. They launched their Yuengling Specials, low-alcohol beers below 0.5%.

A history full of fun facts

A beer for the White House

With Prohibition coming to an end, Yuengling got their wits about them again, releasing a beer to commemorate the great victory and the repeal of the great Prohibition. What else did they do? Send a whole truckload of their best-known beer to the White House, as a token of appreciation to President Roosevelt. Was this already a great marketing strategy almost a century ago?

The great expansion of Yuengling. A national symbol

But the brewery's biggest boom came in the 1970s. Its sales increased dramatically due to the US Bicentennial in 1976. This brewery became a national symbol of the United States, and has always gone hand in hand with great historical and political moments.

It is not surprising then that in 1985 the brewery was listed on the National Register of Historic Places.

Because of this expansion, they took over the Stroh Brewing Company of Tampa in 1999 to increase their production capacity.

Their first collaborative beer would not arrive until 2019, launching with Hershey's a limited edition Yuengling Hershey's Chocolate Porter. Although to this day, their Traditional Lager remains the most popular of them all, hands down.